In celebration of history, a mock battle between Bulgarian and Ottoman forces is held on an annual basis in the town center of Veliki Preslav
2

19th of May – European Night of Museums.

All of the Museums in Europe are open and there is no entrence fee; this includes the museum of Veliki Preslav.
3

24th of May – Celebration of the City Festival.

All 27 regions of Bulgaria have a specific date during which they celebrate their cities. On the 24th of May, Shumen and Veliki Preslav will hold a festival in honor of the cities and the region.
4

During the annual Folk Festival, you may enjoy traditional Bulgarian Music & Dance performances. The prized museum treasure will also be open to the public, free of charge.
BULGARIAN TRADITIONS

Chasing the cross into the freezing waters: Jordan’s Day on Epiphany

On 6 January each year, Christian Bulgarians mark Epiphany and the Baptism of Jesus, locally known as Jordan’s Day (Йордановден, Yordanovden), with some rather manly traditions that make use of the icy winter waters. According to one custom, a priest throws a cross into a river or lake and all willing men jump after the cross in a competition to reach and retrieve it. The saying goes that whoever catches the cross will be happy and healthy throughout the year.
Another Jordan’s Day tradition is the icy round dance. Rather than chasing a cross, this involves men dancing in a freezing river to traditional Bulgarian tunes. This custom is best associated with the town of Kalofer, though it has been practiced in other places as well. 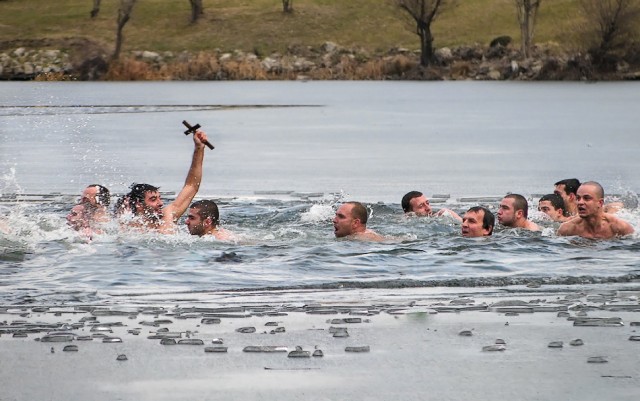 Carnival against the evil spirits: Kukeri

While carnivals are widespread around the world before Lent, Bulgaria’s Kukeri(кукери) stand out with their scary costumes which look like they have come from an elaborate horror production. An ancient ritual to drive away the evil spirits, the procession of the Kukeri is celebrated either around New Year’s Eve or on Cheesefare Sunday, just before Lent.
The Bulgarian Kukeri are unmistakable thanks to their incredibly creepy masks, the huge bells on their belt and the costumes made of thick animal pelts. A great place to see the variety of costumes is the city of Pernik on the days of the Surva masquerade festival in late January or early February each year. 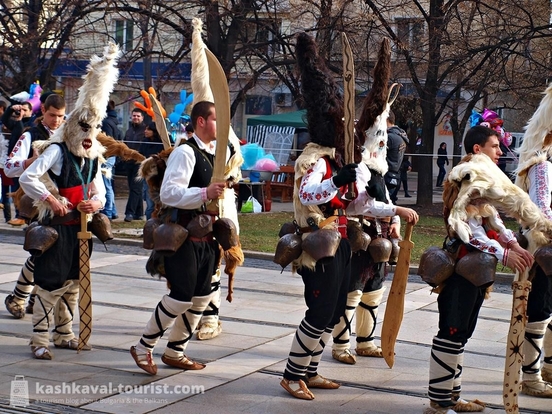 In Bulgarian folklore, the first day of March is regarded as the beginning of spring. March is imagined in the shape of the mythical grumpy old lady Baba Marta (Баба Марта, “Granny March”) and deeply associated with the red-and-white yarn adornment called Martenitsa (мартеница). On 1 March every year, Bulgarians give a Martenitsa to each of their friends to congratulate them on the beginning of spring.
And when you see a blossoming tree or a stork, you’re supposed to tie the Martenitsa to the tree or place it under a rock, respectively. As a result, in March basically all of Bulgaria is covered in red and white to welcome the warmth of springtime. 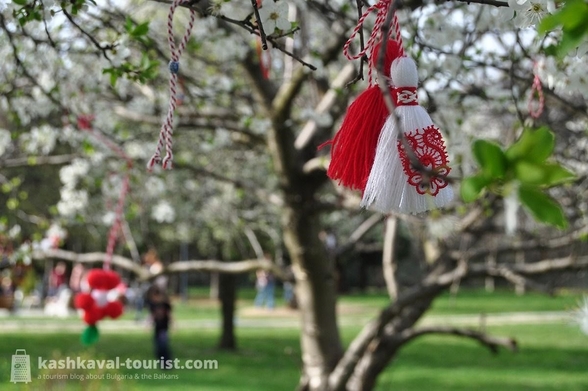 In a few isolated villages in the rolling Strandzha Mountains near the Turkish border, a mystical ritual has survived till the present day. On the night of Saints Constantine and Helen’s Day, villagers gather on the square to dance – barefoot – on burning embers. Reportedly, the dancers (called nestinari, нестинари) descend into a state of trance induced by a sacred drum, explaining the complete lack of pain felt by the participants.
The tradition of Nestinarstvo or Anastenaria combines Eastern Orthodox principles with more ancient pagan rituals. Curiously, it is practiced by both ethnic Bulgarians and the former Greek population of some of the villages in Strandzha.
2 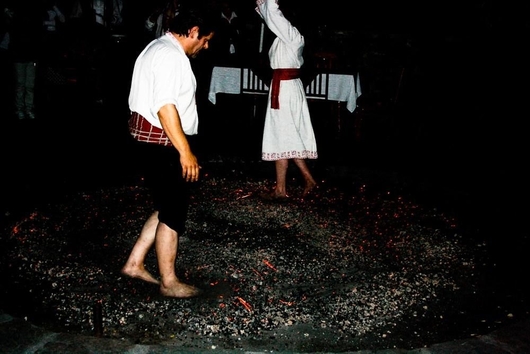 Valentine’s Day? No thanks, I’ll celebrate wine instead: Trifon Zarezan

While the Western tradition of Valentine’s Day has thoroughly invaded Bulgaria in the last few decades, every Bulgarian knows that 14 February of each year is actually the time for another, more traditional local festival. Trifon Zarezan, or Vine-growers’ Day, is less about loving a person… and all about loving wine!
Mid-February is usually the time when vines are cut to ensure proper growth and an abundant harvest in autumn. Due to this, the traditional cutting of the vines has evolved into the holiday of Trifon Zarezan, a celebration of fertility and Bulgarian wine’s magical qualities. Needless to say, singles and even many couples prefer Trifon Zarezan to Valentine’s Day, and for a good reason…

With this ritual, the girls wonder who they will marry, and turn to Lada, the goddess of love and married life, to tell them what he will be.
At the feast, the girls bring a water from the spring or the well to a white boiler. This water is called by different names, depending on which feast the ritual is performed: silent, loose, vassilian, colorful. Once they bring the water, the girls gather in one house and each leaves their ring or wrist, which is attached to a ring, bracelet or other jewelry in the boiler. It is left at night under Trendafil or another "star" flower.
In the morning, one of the girls or a little girl dressed as a bride pulls off the rings and wrists, and the rest sing short songs. With them, they predict a near or far-off marriage, luck in the marriage, social status and qualities of the future married ones: "mature quince and aphor" (the girl will be married old); "you, yourself a pearl of a pebble" (she will marry an orphan); "yellow veil fever collapses" (the girl will fall).
Every girl takes a little oat (barley) from the pot and puts it under his pillow. It is believed that a young man dreams at night that he will marry her.If the water in the kettle will freeze at night, it is believed that will be good for the health during the year. The feast ends with a common choir. 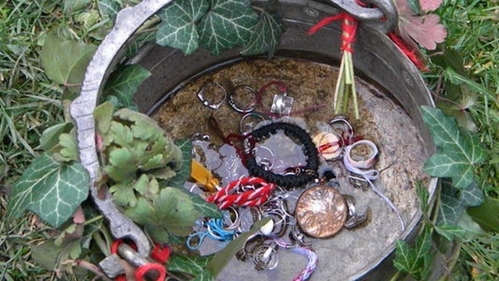 Lazarice , also known by its Bulgarian name Lazaruvane (Bulgarian: лазаруване), is a traditional procession during the Bulgarian Orthodox feast of Lazareva Subota (corresponding to, but distinct from Lazarus
Saturday in other Orthodox churches), the day before Palm Sunday. Traditionally, a girl who has never participated in the ritual may not marry or be engaged.
The ritual is performed by young girls (typically of age 16 who are unmarried), called lazarki (Bulgarian: лазарки). The girls decorate their hair richly and colorfully (usually with flower and ribbon wreaths) and dance around the village singing songs. They stop from house to house, performing songs and blessing the homes, accepting small presents and food from the hosts, typically the men. They meet by a river, where they drop their wreaths. It is said that the girl whose laurel first takes the lead will be married first.
Traditionally the groups of lazarki would number around 14, but there are regional variances. It is no longer widely practiced in the large cities where many people live, and tends to be kept alive in the smaller villages - at least those which have young girls. 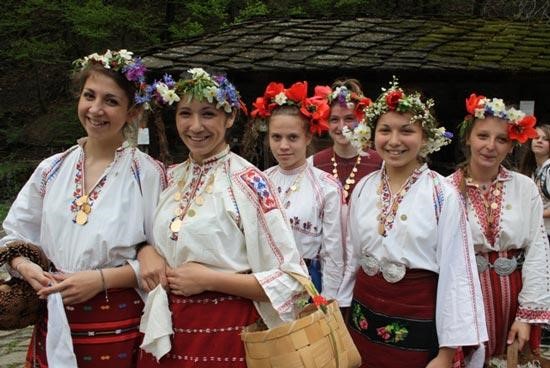 Bulgarian cuisine is heterogeneous and varied. Something very typical in Bulgarian cuisine is the cooking of most of the products at the same time. The recipes include many vegetables and spices like garlic, black pepper, thyme, mint, savory, the bay leaf and the paprika.

There is almost no Bulgarian dish without the parsley being present. It is used in main dishes, in soups and in salads. It is consumed both fresh and dry.

Basil is especially appreciated as a seasoning for meats, beans and meals with potatoes.

However, the most tradicional spice in Bulgaria is called Chubrica. Nobody can not imagine the beans soup without it.

You can talk at length about the typical homemade brandy and its presence at the table of the Bulgarian ... Many families keep until today family recipes of how the good rakia brandy is distilled. There are those who on holidays or other great occasions of family life take from their reserves bottles of rakia brandy stored for decades, "to warm the body and soul," according to a popular saying.
In principle, the rakia brandy "goes hand in hand" with the traditional Bulgarian shopska salad, typical of the Sofia region. The brandy is taken as an appetizer, before starting to eat and no afte that like in others countries.
The rakia brandy is a must on the Bulgarian table on working days and holidays. It usually has between 40 and 50 degrees of alcohol. In Bulgaria it is distilled mostly from grapes, plums and apricots, although there are also rakia from quince, apple, pear, raspberries, cherries, and even rose petals ... You can practically distill all fruit with good content of sugar.
The good rakia is left to age in oak barrels so that they acquire a milder flavor and a golden color. In winter, in many parts of Bulgaria, rakia is drunk hot, sweetened with caramelized sugar or honey.

Wine is closely linked to the Bulgarian lands that have been inhabited for thousands of years by the ancient Thracians - a civilization that worshiped the gods Zagreo and Dionisio and used wine in their religious rituals. The traditions in winemaking do not have been interrupted and Bulgaria currently feels proud for its quality wines, some of which they are elaborated based on native grape varieties Bulgarians with impressive characteristics.
The temperate climate of Preslav is very favorable mainly for the cultivation of white varieties such as: Sauvignon blanc, Chardonnay, Ugni Blanc, Dimiat, Rkatsiteli, Traminer, Aligoté and Riesling. Also, the long and warm autumns constitute a premise for the production of fantastic semi-dry white wines.

Yogurt is one of the pillars of Bulgarian cuisine and also the main ingredient of many dishes. They say, in addition, that their daily consumption is the secret of the long life of the Bulgarian population.
According to scientists, the famous Bulgarian yogurt delays aging because it destroys harmful bacteria in the human body. The merit is the bacteria "lactobacillus bulgaricus" that facilitates the fermentation of yogurt. This bacterium was discovered in 1905 by the Bulgarian scientist Stamen Grigorov.
4

What would the taste of the famous shopska salad look like if it were not abundantly covered with tasty Bulgarian white cheese?
The traditional breakfast of the Bulgarian also begins with toast and a good slice of cheese.
What can we say about the memories each one has of the banana prepared with cheese and eggs that takes us back to childhood and whose aroma warms our hearts?
A piece of cheese and some bread was the food that saved the people who worked in the fields. In years of poverty and hunger, cheese was the most luxurious delicacy on the Bulgarian table.
In Bulgaria the word cheese is usually used when we talk about brined white cheese.

© 2017 All rights reserved. With ❤ by Open Space Foundation.